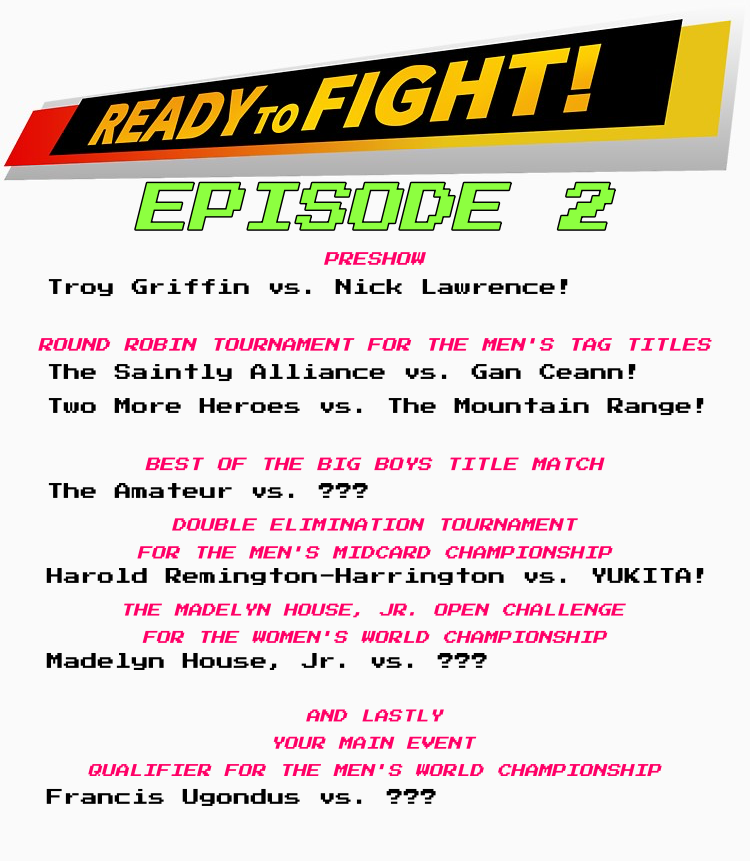 Ex-gangster TROY GRIFFIN faces off with not-quite-a-cop NICK LAWRENCE! We don't know who'll win this one - sadly, as of yet neither man can claim much success among their companions in the Armbar Error Society - but just between you and me, we hope it's Troy.

ROUND ROBIN TOURNAMENT FOR THE MEN'S TAG TITLES

Two teams that graced the first show, THE SAINTLY ALLIANCE and GAN CEANN, now face each other, while TWO MORE HEROES take on amicable brothers THE MOUNTAIN RANGE.

BOTBB champion The Amateur is set to be challenged by an unknown competitor, but we've heard through the grapevine that this man might truly be able to lay claim to being both the best and the biggest of all boys.

In this instalment, a former intelligence agent-turned-wrestler takes on AES' flashiest businessman-turned-wrestler. Who will come out on top, HAROLD REMINGTON-HARRINGTON or YUKITA NORI?

QUALIFIER FOR THE MEN'S WORLD CHAMPIONSHIP

In the main event of tonight's show, FRANCIS UGONDUS takes on... someone. Hmm. With their identity hidden, there's not much we can say about this match - but we'd urge them to exercise caution, knowing what Francis Ugondus is capable of in the ring.